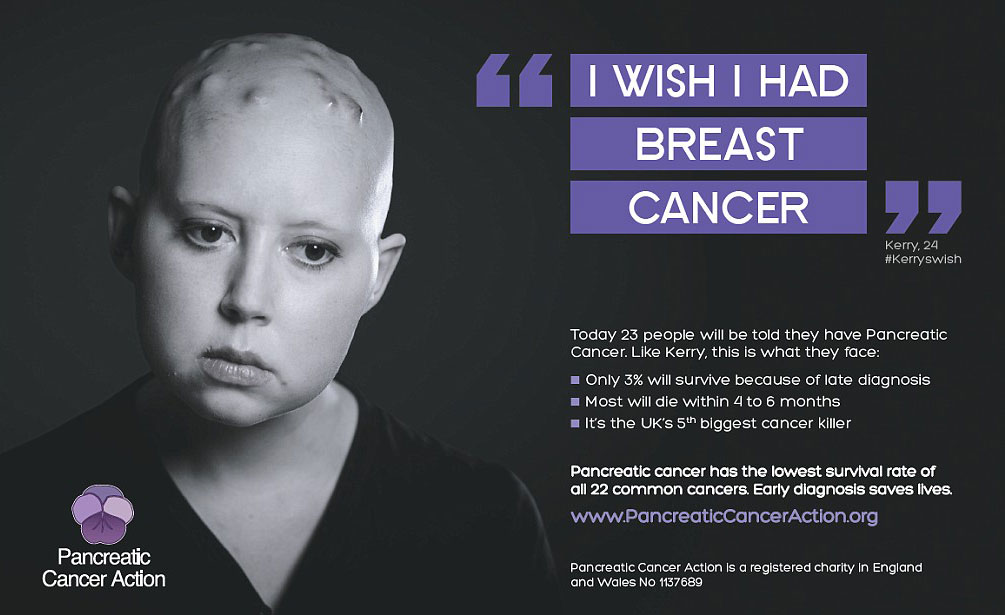 Shock ads of pancreatic cancer patients ‘wishing’ they had more survivable cancers could save the NHS £3.1m because of earlier diagnoses, a ROI of about 4000:1

Q1. When and why did you decide to launch a campaign?

NR “It wasn’t our job to decide to launch a campaign but we, and especially my creative partner, did lobby quite hard for Pancreatic Cancer Action to do something in the comms space to address this terrible disease.  The reason we did this was that both Greg (creative partner) and I had lost someone close to the disease.”

AS: “We decided to launch a campaign following an Ipsos Mori poll we commissioned into the public’s awareness of pancreatic cancer. The findings of the research were shocking.

“Over 70% of the UK population did not know where their pancreas was, let alone anything about pancreatic cancer. We knew we had to try to change things, and in the absence of any help from government in terms of promotion of pancreatic cancer through symptoms awareness campaigns, we had to go it alone.

“We also had to do something about the lack of survival for this disease. The fact that only 3% of people diagnosed with pancreatic cancer will survive beyond five years is shocking enough, but this survival rate has remained the same over the past 40 years with no improvement. We needed to highlight the inequality of cancer survival rates.

“We decided that we had to launch a campaign to ‘tell it how it is’ about pancreatic cancer.”

Q2. How did you feel about the original brief?

NR: “It sounds strange, but it was probably one of the easiest briefs I have ever written.  We knew it needed to be bold, clear and unequivocal in its aim of shaking people out of their apathy towards pancreatic cancer.  The facts speak for themselves and all the brief had to do was translate that to how people feel.”

AS: “We felt that the brief was bold and hard-hitting – just what we needed. We felt excited and nervous at the same time.”

Q3. How hard was it to get the campaign signed off?

NR: “From our side, it felt tremendously hard and it took over a year to go from presentation to being in print. The reasons for this were complex but completely understandable as it was/is an extremely challenging campaign.

“Several rounds of research had to be conducted — including cutting edge neuroscience — to make sure that we walked the line between over-offending people and not generating enough attention. Inevitably, being a charity there were lots of vested interests including all the trustees and they all needed to be convinced of the potential rewards vs. ‘the risk’ of a controversial campaign like ours.”

AS: “It took us a while to go with our instincts and press ahead with the adverts. Once we had made the decision to go ahead, the approval process was fairly easy although some members of our Trustee board were a little nervous of this bold approach.

“We worked closely with Team Darwin who presented on two occasions to our Board of Trustees the findings of their extensive background research and focus group results, which managed to address most of the initial concerns.”

“We had to launch a campaign to ‘tell it how it is’”
- Ali Stunt, Pancreatic Cancer Action

Q4. When and how did you first know that you had been successful?

AS: “The print adverts went out on Tuesday 4th February (World Cancer Day) and by 11am the next day we had received calls from virtually every single national newspaper in the UK wanting to run a story based on the adverts.

“Social media (especially Twitter) went crazy with the reaction to our bold approach.

“The following day the back-to-back TV and radio interviews commenced and our advert was being reproduced in virtually every UK national newspaper, their online versions and across hundreds of blogs and websites including high profile ones like The Huffington Post and BBC Online. Such was the demand; we had to turn down a few interviews.

“The attention didn’t stop after a few days. In the following weeks, we were still taking media requests and four months later, I was still being asked to attend conferences to speak about the advert.”

Q5. What was the biggest challenge in demonstrating the effectiveness of your work?

NR: “Crikey – that’s a big question. On the one hand, measuring the effectiveness in terms of earned media was relatively straightforward but that really didn’t tell the whole story. This is a campaign whose job was to generate more awareness than the tiny budget would normally allow so that people would become more aware of the symptoms and ultimately get themselves checked by their doctor and ask that doctor to consider pancreatic cancer.

“If we could get that to happen, perhaps more people would be diagnosed early and this would save lives and money. So building an assumptive model on the likely effect, which we based on previous cancer campaigns, was the biggest challenge.”

AS: “An awareness campaign is always going to be difficult to properly evaluate, as, unlike an FMCG company, we can’t monitor before and after sales in the same way.

“Also, being a small charity, we are not able to fund media monitoring services and find it difficult financially to commission large pieces of market research after every activity. However, based on the small amount of research we were able to fund, and with the help of Team Darwin, we managed to establish that over 27% of UK adults had seen our advert and, of the UK public who had seen the advert, 43% of them were more aware of the symptoms of pancreatic cancer. We did see a huge uplift in web traffic and in particular to pages that gave information about pancreatic cancer and its symptoms.

“Trying to quantify the impact the campaign has had on the disease is the hardest effectiveness measure but one that is important to us. We are hopeful that greater awareness of the symptoms of the disease will lead to some people being diagnosed sooner – thus saving lives.”

Q6. How did this campaign compare to previous campaigns by the brand and competitors?

NR: “This was this brand’s first campaign, but the sector is used to well-funded shock tactics.  Ours took things further by giving a voice to thoughts and insights that are usually buried and considered ‘un-sayable’.”

Q7. What lessons did this campaign teach you?

NR: “It was a very interesting lesson in how the media works. Initially the reporting was often one of disgust. Then people would defend it (our patients and some famous people). After that, the reporting changed to a much more sympathetic stand point.

“Finally, one of the patients in the ad tragically died and it seemed to bring home how bleak the situation was for Pancreatic cancer suffers. The other key lesson was how ultimately informed and intelligent the public were in the debate – the vast majority could see the whole point of the campaign and were broadly supportive. In other words, the British public need to be given more credit for being able to fathom things out!

“I’m not sure I learnt it, but I’ve re-learnt the risk-reward line. Things can get a bit safe in day to day brand land.”

AS: “To trust our instincts – to go with what feels right. It has taught us that even though our campaign was bold, using real patients making genuine statements, this gave us integrity and without integrity this campaign would not have worked and could possibly have damaged our reputation.

“We have learned that we will need extra resource (we currently have only three full-time equivalent employees) if we are ever to run such a huge campaign again since coping with the demands of both the media and the public was stressful.”

Q8. What were the low points/high points of this campaign?

AS: “High points were when we saw the tide of public opinion swinging in our favour helped along by some high profile supporters in the press, including BBC Radio 4Woman’s Hour presenter, Jenni Murray.

“The biggest low point was when the lovely Kerry Harvey, one of the faces of our campaign, who was suffering from terminal pancreatic cancer, received death threats via Twitter. Kerry’s death a couple of weeks after the campaign was launched was a blow to us all.”

JE: “The low point for me personally was receiving a very moving letter from a breast cancer sufferer who took issue with our whole campaign approach. We really did not want to upset anybody but knew there was a small risk of it. We told ourselves we were doing it for the greater good but coming face to face with the ‘cost’ was hard.”

“The high point is the exact reverse, when we knew that the tiny budget had managed to make 27% of the population aware of our campaign and that nearly half of them were much better informed about the symptoms so that in all likelihood the campaign would save lives.”

Q9. What would you do differently if you did this campaign over again?

NR: “Better counsel the client on the likely fall out and how to handle it.”

AS: “We would definitely look at how we resource the team to manage the impact of the campaign to prevent us from becoming physically burnt out and mentally frazzled!

“We have already implemented a much stricter complaints procedure to prioritise complaints and a tougher social media moderator policy to deal with the issue of ‘trolls’.”

Sudler London continues to restructure and expand its Creative Department.
Video on leveraging social in regulated industry: How do pharma companies stay on top?