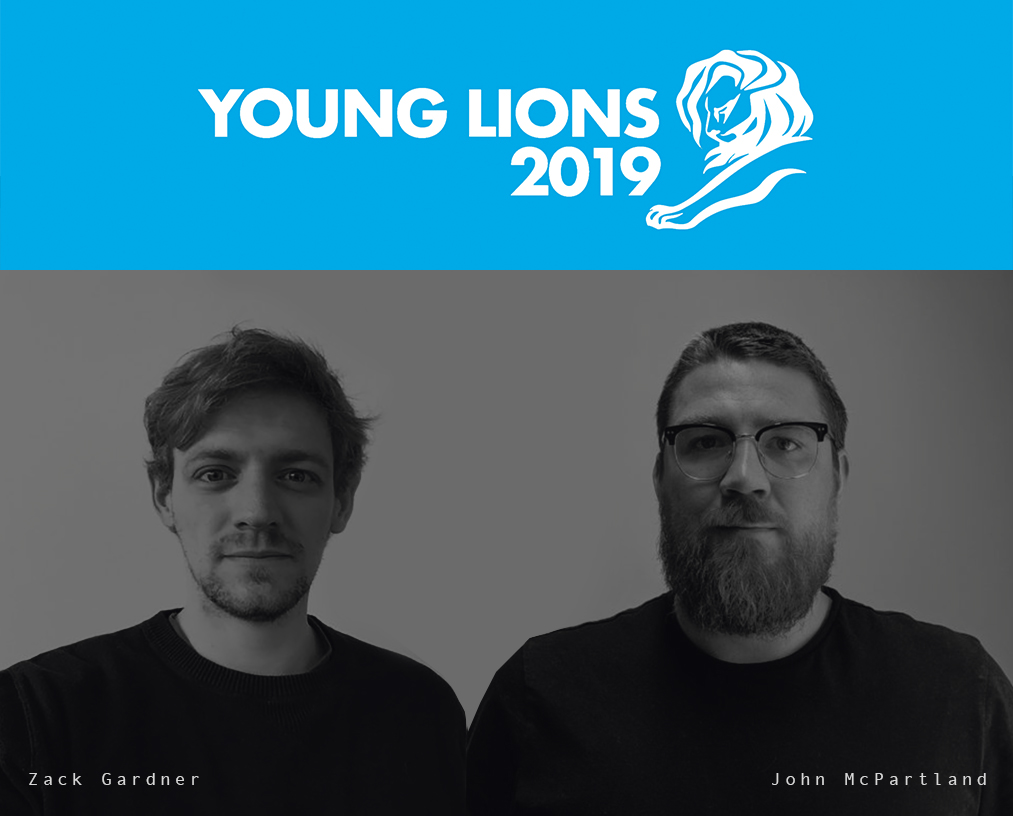 AdHealth sat down with the UK winners of the Young Lions Print competition. It was refreshing to see this year’s winners coming from within the healthcare industry, flying the flag for Pharma creativity. Both work at Havas Lynx (who scooped the coveted Cannes Lions Healthcare Agency of the Year in 2018.)

Before we begin the interview, here’s a little bio for each of them:

John is a Deputy Creative Director from Manchester. With 8 years’ advertising experience under his belt, he’s driven by the big idea and beautiful craft. He has a beard, 2 kids, greying hair (no correlation) and 17 of the same black t-shirt.

Zack is a Creative Copywriter. An Edinburgh native with 3 years’ advertising experience, he enjoys football, tennis and writing about himself in the 3rd person. When he was 11, former world snooker champion John Parrot told him to “p*** off’ at Kelso Races. He deserved it.

AdHealth (AH): Thanks for taking the time to speak to us. I’m sure you’ve been swamped with requests for interviews. Firstly, congrats on the win! It’s great to see healthcare advertising creatives competing with the rest of the industry – and winning! So, what were your initial reactions on finding out you had won?

John (J): It was a huge surprise. I was going through security at Johannesburg airport as the email came through, I had just read the first line and had to put my phone through the X-ray machine so it took me about 10 minutes to actually read the rest of it. I was also wondering how the hell people were going to think I’m still being classed as young.

Zack (Z): I was on a stag do as it happens. I didn’t have access to work emails so woke to a fairly cryptic WhatsApp from John. My hazy recollection is that I swore pretty violently when it clicked and called my girlfriend. I didn’t realise how early in the morning it was. I think she swore violently too!

AH: Now that it’s sunk in, what does it mean to you to?

J: It obviously means a huge amount. Both personally and professionally. Having worked in healthcare for almost 8 years I have seen the transformation that has taken place over the last few years. There is however still a preconception that we the poor cousin of consumer, just try recruiting creatives and you’ll soon get the hint.

So it’s great to show that the poor cousins can still hold their own with the rest of the family, we’ll be flying the flag for not just the UK but for healthcare.

Z: Yeah it means a great deal. To get that acknowledgement from industry heavyweights this early in my career is so, so encouraging. Especially given that I didn’t come from an advertising background. I had to move from Edinburgh to Manchester to get a job in the first place, leaving a lot behind in the process. It maybe sounds a bit Disney, but this feels like the sacrifice was absolutely worth it.

And just to echo John, it’s nice to show that creativity can come from anywhere. No one or no particular ‘sector’ has a monopoly on it.

AH: What are you looking forward to the most about competing at Cannes and the festival itself?

Z: Aside from getting some rays on this milk bottle Scottish skin?

When it comes to the competition, what I loved about the UK version and what I hope will be even more the case in Cannes, is the pure concept creation every team will have to do. There’s no time for hand wringing, or feedback, or amends, or testing, or re-briefing, or ‘key stakeholder engagement’ . It’s a case of ‘best idea wins’ and I find that really, really exciting.

More generally, I never thought in a million years I’d make it to Cannes. I’m going with my eyes and ears open, eager meet as many people as possible, learn as much as I can and not waste a single minute of this fantastic opportunity.

J: What I’m really looking forward to is seeing where a group of people from a huge variety of backgrounds take a single brief. You always find that that’s where the most interesting work comes from so it’ll be interesting to see.

The show itself will obviously be hugely inspirational and I’m looking forward to seeing the type of work that is being produced and awarded this year.

There has been a huge trend for brands to jump on the social good band wagon at the moment, some for genuine reasons but there seems to be a lot for the sake of it, social good work for awards. So it will be interesting to see whether the industry rewards that work or sees through it.

AH: What would it mean to go all the way and win the whole thing?

J: Well even to win the UK competition has been more than expected so anything else will be a massive bonus. I say that now…

Z: I’m worried if we get too good a result in Europe we’ll be tapped for the Brexit team!

As John says, anything beyond what’s happened so far would be a bonus. But we’re going there fully intending to do Ol’ Blighty proud.

AH: Any tips for other young creatives working in the industry and especially healthcare?

J: This is my last year being able to do the ‘young’ circuit. I would say to make the most of the opportunities that are there for you. Being a LIAison at London International back in October was a completely unique and incredible experience, and now Cannes tops it all off, these chances don’t come around often so take it whilst you can.

For those in healthcare this is especially true. There are some incredibly talented people out there doing great work and it’s a great chance to get the recognition you deserve.

Z: Get involved in everything and anything and back yourself.

My first break came from winning a placement competition that, truth be told, I had no right to.

In terms of healthcare, when you get the idea, you have to be prepared to defend it even more than usual. To be a little more ‘difficult’, to keep it in the mix. To fight even further to get the good work through. That’s the challenge. But when you nail it and help bring something life changing closer to patients and healthcare professionals… Well, it’s just what the doctor ordered.

AH: Thanks again, and all the best in Cannes. Fingers crossed for another big win!