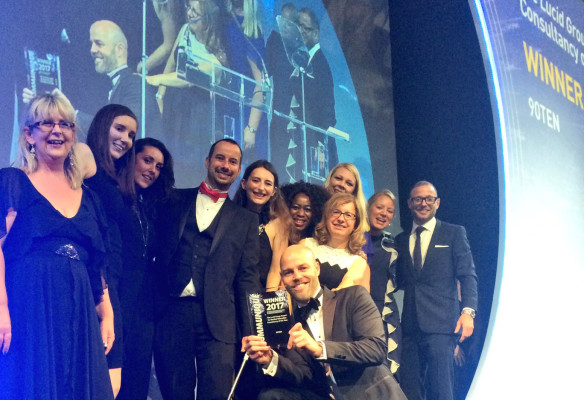 Commenting on 90TEN’s Consultancy of the Year award the Communiqué judges said: “90TEN had an outstanding year with a huge increase in staff to match. We loved the simplicity and authenticity of the story of their success and the heart within their company culture.

“This is a company with a life changing ethos and a laser focus on where it wants to stay. A worthy winner in highly competitive category.”

The agency had been up against Incisive Health, Lucid Group and Pegasus in the category, while it also saw off competition from Complete Medical Communications, Porterhouse Medical and Rock Unlimited to take home the Lucid Group Award for Medical Education Consultancy of the Year.

Commenting on that win the judges said: “90TEN were a clear winner. The judges were impressed by the 100% client retention in 2016. They demonstrated an evolution of values, which were clearly supported by the staff feedback and impressive range of staff programmes.

“90TEN also had outstanding growth in 2016, demonstrating they genuinely want to achieve the best for their clients.”

The agency achieved unprecedented growth during 2016, nearly doubling its fee income, client portfolio and head count, and successfully took its services into the US market.

PRIME aimed to change behaviour in a population of gay men at high risk of becoming HIV positive.

90TEN tacked that by target those with a greater than 10% chance of becoming HIV positive in the next year, tailoring a lifestyle intervention for them that offered emotional and educational support through managed content.

Accessing them through their mobiles was a key strategy because this group showed high levels of engagement with online mobile media for sexual purposes and PRIME included five digital programmes that addressed different sexual behaviours so members could switch intervention as their lifestyle changed.

PRIME users saw a 94% fall in HIV infection risk along with a reduction of more than 50% in other sexually transmitted diseases, in the process saving the NHS £17m.

Run by PMLiVE’s publisher the PMGroup, the Communiqué Awards recognise and reward outstanding work in healthcare communications across local, European and international markets.

* See all the 2017 Communiqué Awards results

(Original article can be found HERE.)