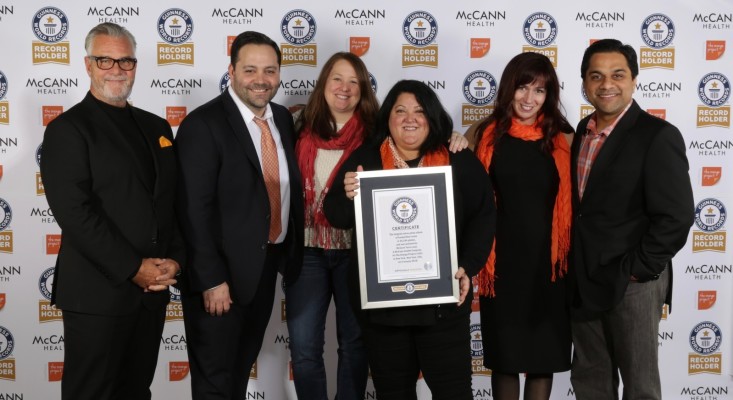 McCann Health, part of McCann Worldgroup and the Interpublic Group (has announced that Guinness World Records has awarded McCann Torre Lazur (MTL), A McCann Health Company based in Parsippany, New Jersey the world record for The Orange Project, the largest online album of handwritten notes with more than 34,000 notes tallied.

The once-in-a-lifetime achievement was presented in New York at a celebration attended by over 200 ad agency staff and alongside the New York City chapter of the American Foundation for Suicide Prevention (AFSP) and Guinness World Records officials in their Parsippany offices with orange-themed food, drinks, and decorations.

Created by youth, for the youth, The Orange Project not only broke a world record, but also empowered adolescents to help save the lives of people just like them. MTL teamed up with UK-based, youth-focused organization, The Ideas Foundation, to roll out a worldwide creative competition asking teens how they would prefer talking to each other about suicide. Handwritten notes was the solution developed by a team from Kingston College.  Students were briefed by Jennifer Dee who said:

“When someone you love dies by suicide, there’s no handbook, no rules, no guidance for how to handle it,” says Jennifer Dee, VP, Director, Integrated Production at MTL, who founded the project due to personal loss. “No one explains how to deal with the guilt or the grief or the questions. Nobody tells you how to sift through the darkness and come out on the other side. For months afterward, I didn’t want to do anything but lay in a fetal position for the rest of my life.”

But after many months of grieving, Jennifer decided that she needed to take action, to do something to prevent deaths like her boyfriend’s or experiences like hers, to break down the silence and stigma that surrounds suicide.

Jennifer Dee and Marcia Goddard heard about the work of the Ideas Foundation, a UK charity at The Creative Floor Healthcare Awards.  They reached out to the education charity and with money from The Creative Floor’s Talent & Diversity Fund, a challenge was set for young people in the UK to find a way of breaking the Guinness World Record and raising awareness of mental health issues in schools.  Students from the Amos Bursary Trust, Kingston College and St Ambrose Barlow all worked on the brief with insights and support from researchers from Sound Research.  Two groups of young people also visited the McCann agency at their offices during the course of the project.

MTL kicked off The Orange Project on September 10th, World Suicide Prevention Day 2016, with a team of employees who volunteered to collect handwritten notes of hope and encouragement for those struggling with depression and suicidal thoughts. The project emphasizes the importance of real connections by stripping away technology and encouraging people to have conversations about mental health and suicide.

We were thrilled to work on such a vital brief with young people. We were worried that the brief might have seen as too dark but in reality the students had an opportunity to work through the research into suicide and also help their peers recognize the warning signs and help available.  The Ideas Foundation works on live briefs supported by industry mentors from companies such as the Sound. This might be one of the most impactful programmes we have ever done.  The funding from The Creative Floor Healthcare Awards enabled us to work in a number of schools and colleges and with young people from the Amos Bursary Trust.

Our award aims to raise money towards helping more diversity and underprivileged talent into the advertising industry. This just proves that diversity is the key to ground breaking and now world record breaking work. A massive Thank You to The Ideas Foundation, McCann, Sound Research and Everyone who supports The Creative Floor Healthcare Awards.

Schools across the world were invited to incorporate The Orange Project into their curriculum. Schools in seven states adopted The Orange Project into their lessons, Health and Wellness days, and district-wide activities. Administrators draped banners in the hallways to display thousands of notes for students and teachers to read and initiate conversations about suicide. Teachers spoke to students about their struggles and asked them to think about what makes life worth living.

The MTL team’s campaign against suicide began on World Suicide Prevention Day 2014 with the launch of the hashtag #worthliving. Now, with The Orange Project, they’ve made Guinness World Record-breaking strides to help prevent suicide. The goal of this team? To spread hope, and ultimately save a life.

The Creative Floor Talent & Diversity Fund is now open for this year’s applications and the awards launch on 25th June 2018.