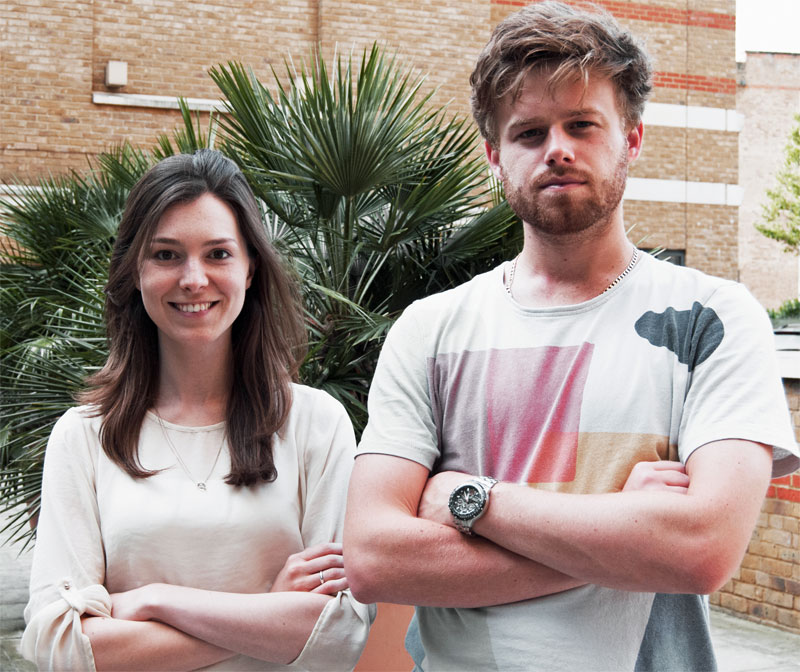 This week we were lucky enough to speak to Louisa Garnier and Nick Robinson a creative team at Publicis Life Brand Resolute who were this year’s winners of the prestigious IPA Best of Health Rising Star award.

AH: How did you get started in your career?
NR: I worked as an art director at Specsavers. It was an excellent job and I should’ve stayed there for longer. In terms of healthcare, I saw a Creative Floor tweet advertising a job. That job turned out to be an agency in healthcare. I used Twitter rarely so it was a freak accident that I ended up here.

LG: After my master’s degree in Science Communication, I went on the hunt for a job in an industry where creativity meets science. I eventually found what I was looking for at PLBR.

AH: How did you both get working together?

NR: Louisa joined the company shortly after me. The creative department is quite organic and everybody works with everyone else, but we got on really well together and continue to do so.

LG: Nick and I started at PLBR within weeks of each other. I think we realised pretty early on that we share a similar ethos.

AH: What does your role as a Creative involve?
NR: Being eternally optimistic. It varies all the time. Lots of thinking, lots of drawing, lots of bashing heads together.

LG: Collaboration, problem solving and a lot of hard work!

AH: Which skills and personal qualities do you need in your role?
NR: You need to be passionate about the job, otherwise I think you’d go insane, and be willing to work jolly hard. With some demands you often need the ability to bend time or own a time machine.

LG: I’m still working that out. As a copywriter, a good grasp of the relevant data and a flexible mind are prerequisites for the job. You also need passion (tempered by a cool head), an ability to spot an opportunity and run with it, and the discipline to always question your own work and find ways to improve it. To really succeed, I think you need a deep-set desire to create change for the better.

AH: Tell us about the project you are most proud of?
NR: That changes continuously. Sorry for the cop-out.

LG: My current favourite campaign is launching this autumn. We’ve had a lot of fun working on it. It’s been a dream project for a copywriter.

AH: Do you ever completely disagree with each other on work?
NR: We’ll both be pushing work in the same direction, i.e. making the best thing we can. Obviously there are times when our opinions differ but we’ll just work it out.

LG: On the whole, we work together seamlessly. But I think it would be wrong if we always agreed with each other. Generally, we’ve found that a healthy debate leads to better work.

AH: Where do you look for inspiration?
NR: Going outside and getting off the computer. I need to do both more. I’ve found cycling to work quite a good way to clear the mind. Actually, there’s some great inspiration in other sports too, even football, which is why I started a blog called Galette Football (www.galettefootball.com). There’s a cracking back story to the name, but I’ve already drifted way off tangent.

AH: Do you think we sometimes use regulation an excuse to make work that doesn’t live up to standard consumer advertising?
NR: I find getting risky or off-the-wall ideas through risk-averse clients more problematic than regulations, despite it being in their (and, more importantly, the patients’) best interests to go with them! Everything is regulated in some way or another so there will always be obstacles to overcome whatever the job. So ultimately it comes down to selling it in. (Which reminds me. I’ve always found it easier to sell ideas face to face. The phone is a nightmare.)

LG: I don’t think regulations need to get in the way of a good idea or beautiful execution. Yes, regulations are a hurdle, but so many industries are tightly regulated. The biggest hurdle is persuading clients to be brave.

AH: Are there any projects you are working on that we should keep an eye out for in the coming months?
NR: There’s some work that’s launching soon that we’re really excited about.

LG: We’re hugely excited about the project mentioned above that’s launching this autumn.

AH: Who do you look up to and why?
NR: Oliver Jeffers. An outrageously good storyteller with the gift of craft to go with it. His children’s books are sublime; Paul Belford. A great art director with a relentlessly good portfolio; Mark Denton. Completely off-the-wall and able to make anything fun happen; My Grandad, who is a cartoonist. Each day has to check through the news, come up with a great idea, and then draw it. It’s a combination of skills.

Ask me on another day and I’m sure the list will be different.

LG: I make it my business to learn everything I can from other people. The list of people who influence me is so long it’s embarrassing. I’m from a family of five daughters, so I’m always on the lookout for female role models.

AH: Do you look at other healthcare agencies around the world? Who do you think is making the best work at the moment?
NR: I don’t look at agencies particularly but at work that’s good, whether it’s healthcare or not.

LG: I look for great work no matter where it’s come from. The best healthcare projects are often produced by non-healthcare agencies. I do come across impressive work from healthcare agencies, though. The guys at The CementBloc have produced some fantastic campaigns recently.

AH: What is the best piece of work you’ve seen this year?
NR: Just one? I’ve watched Epic Split a million times already, but I didn’t buy a Volvo truck.
I thought the drinkable book project was a really good idea. If you haven’t seen it have a look our blog, Designed to Help (www.designedtohelp.tumblr.com). It’s on there somewhere.

LG: Leo Burnett’s “If only for a second” for The Mimi Foundation is one of those projects I wish I’d worked on. It’s fantastic for so many reasons. We keep track of the work we love on our blog, Designed to Help (www.designedtohelp.tumblr.com).

AH: What advice would you give to someone trying to break into the industry
NR: Make as much stuff as possible. If you have a good idea, make it, even if you don’t have the best equipment or if you’re tired, or whatever. Work with other people. Working in teams always makes jobs more exciting and it’ll probably make the work better.

LG: Talk to people and take any advice you can get. Work hard. Be enthusiastic. I think those things have helped me.

AH: What do you think about Advertising Health? Anything we could do better or different?
NR: It’s great as it covers the most relevant things in the industry.

LG: It’s great. There’s nothing else like it out there.

AH: Did you see the Advertising Health World Top 10 how did it feel to see PLBR featured?
NR: I did, but I can’t remember the order. Surely Droga5 should’ve been top as they made ‘Help I need to save a life’, and that was the best thing ever? It’s nice to be recognised though. Must be doing something right!

LG: I did. It’s nice to see that we’re heading in the right direction.