‘Save the Box’ campaign aims to raise awareness and donations for gynaecological cancer. 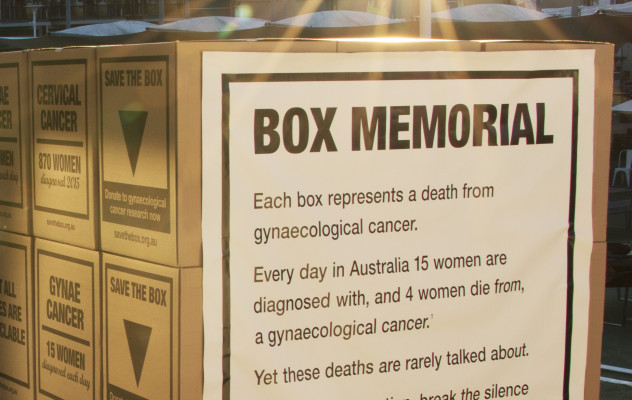 Exactly 1,743 simple cardboard boxes were used to create a huge series of walls and structures, each box representing a woman’s life lost to gynaecological cancer over the previous year. Large billboards were placed nearby, explaining that this ‘box memorial’ was designed to encourage Australians to open up about a subject the majority of people were embarrassed to talk about. The campaign informed viewers through relevant facts incorporated throughout the entire installation and leaflets distributed by women wearing t-shirts.

Yet women weren’t talking about the subject. We discovered that every term for women’s gynaecological organs was either considered offensive, or suggested these organs shouldn’t be talked about, such as private or intimate parts, or trivialised them. So we resurrected a term from the past.

‘The Box’ was a term coined in the 60’s by gynaecologists in reference to hysterectomies. In the 70’s it then became the go-to slang term when referring to women’s parts in a sexual way. Then over the following years it lost its edge. It seemed perfect to us to use in today’s world. A ‘box’ after all is something used to store one’s precious items. It’s also used to protect them from harm.  When you get down to it, it’s also a word used a thousand times a day in every neighbourhood supermarket.  And it had just enough edge to get people listening and talking.

I’d like to stress however, that there’s nothing sexual about this campaign, and that the majority of Australian women have embraced the term as one that is empowering and positive. I believe it’s a term that can make a cultural difference and remove the taboo. It is also one that is leading to women becoming more aware of their bodies and of the vital need for donations for gynaecological cancer research. From a creative point-of-view the term itself led to the medium used throughout the campaign – the everyday cardboard box. As a vehicle for carrying campaign messaging, it was brilliant! And we quickly realised it was scalable and that a single cardboard box could tell a powerful story. But when multiplied, a number of boxes could make an even more impactful statement. The launch event in Sydney’s CBD then followed.

The day itself was amazing, and very humbling. Many of the Saatchi team helped set up the installation and received incredible feedback there and then.

“I was diagnosed with ovarian cancer 2 years ago. Thank God someone is doing something about this”, one woman said to me.

“Women don’t talk about their bits. I have a friend who is even too embarrassed to talk about her lady bits to their GP,” another said to me. 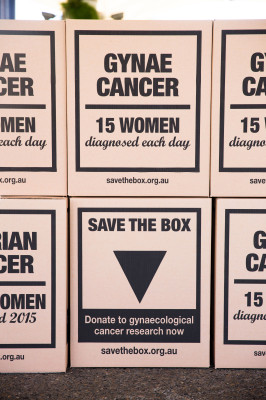 By the end of the day all our staff had received overwhelming support for the campaign, with little negative feedback. Many of those approving of the campaign were actual cancer survivors or relatives of women who had died.” To coincide with the event, an original song and video-clip was launched online, depicting a large number of women, many of them cancer survivors, marching and drumming while wearing the boxes. The film finishes with the women solemnly bowing their heads in memory of those lost to the disease.

Chester continues, “As far as the launch film was concerned, it set the tone-of-voice for the rest of the campaign. We thought it would make a powerful statement if we showed real women rallying to the cause. Essentially it was a call to arms, an invitation for women to talk and discuss their gynaecological organs. We asked for volunteers to appear in our film, and many actual cancer survivors offered to march, believing both in the cause and our creative idea and execution which was incredibly heartening.”

Within hours of launch, #savethebox was all over social media, and the video had been viewed by thousands. 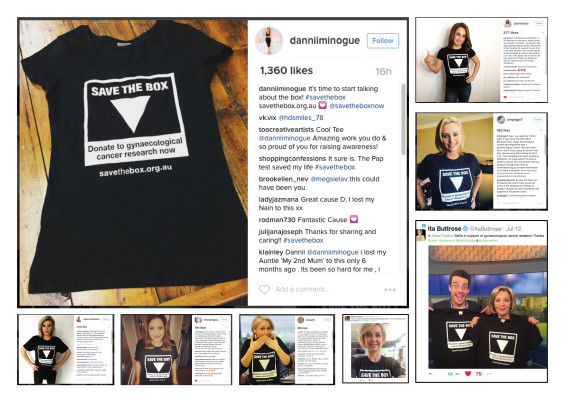 “All up around 30 Australian celebrities of all ages have offered their support for the campaign to date. And their involvement has helped ensure people see ‘Save the Box’ as a worth-while initiative. Media outlets have picked up the story en-mass, including all the major TV networks state-wide and nationally (excluding one), seven major newspapers and magazines and 17 radio stations so far. “Virtually everyone involved in this project, had one clear belief, that while the use of the term ‘the box’ could offend a few, what was really offensive was that women were dying from gynaecological cancers. I think we have an advertising campaign that will save lives. I’d also like to add that my agency, the song writer, the sound studio, our director & producer and many others did this pro-bono. The cost to our client was very small in real terms. They paid for some equipment needed on TVC shoot day and to build the installations, and in energy and good old hard work. Their belief in the campaign and us was phenomenal and I am truly in awe of all the women at ANZGOG, our very, very passionate client.

Finally, I’d like to ask all readers, on their behalf to talk openly about vaginas and vulvas and ovaries. Also to donate to a brilliant charity in Australia that needs support.” Chester continued. Media attention for the ‘Save the Box’ campaign is growing as are the number of discussions surrounding ‘Save the Box’ in Australia as I write. And the donations tin is now beginning to fill.

“Many other installations and events are planned for later in the year. Some will use just a handful of boxes, others will use hundreds, depending on what space is made available.”

Find out more about the campaign at savethebox.org.au