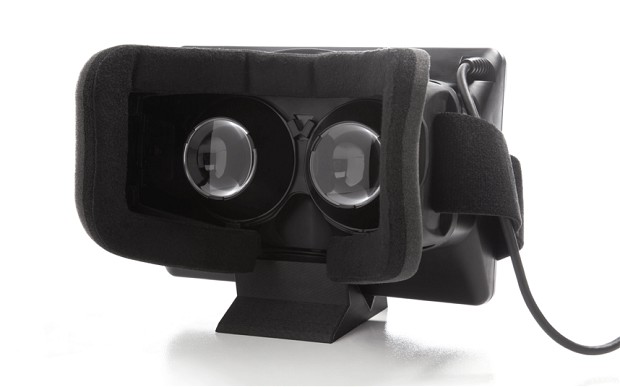 The decade’s most exciting development in computer hardware looks a little like a fat black envelope stuck to a pair of ski goggles, and I had one strapped to my face two months ago as I sat at a desk in the Earls Court Exhibition Centre preparing to fly a Spitfire under a bridge.

Headphones over my ears replaced the thumping bass of the surrounding trade show with the spluttery growl of a Merlin engine. Looking down, I saw a pair of khakied knees and a gloved hand gripping a control yoke; above and to either side, the sun glittered through the cockpit canopy. As I flipped the aircraft into a turn and dive, my senses insisted that I was soaring, upside down, under an iron bridge and into a canyon. But my body and brain remained obstinately upright in a chair in west London, at the glorious mercy of a technology that promises to bring back that most laughable of Nineties computing obsessions: virtual reality.

This device is called the Oculus Rift, and it has come a long way since 2011, when Palmer Luckey, a 19-year-old Californian student, built the prototype from scavenged parts in his parents’ garage. Luckey was an enthusiastic collector of old VR hardware the clunky headsets that had enjoyed a brief tenure in Nineties amusement arcades and had long dreamt of bringing back the technology in a useful form.

But despite the colourful cyber-predictions of films such as Lawnmower Man, there were good reasons that the virtual reality craze had fizzled out by the millennium. The headsets were too heavy to wear for long, and immersion in the blocky graphics of these early virtual worlds came at a price: a stiff neck, motion sickness and the feeling of wading through treacle.

By 2011, however, the magic combination of accurate motion-sensing with lightweight, high-resolution displays no longer seemed so far off. As Luckey realised, the technology was by then integrated into most decent smartphones. So his prototype Rift used the equivalent of a large smartphone screen to display offset moving images, one for each eye, which the brain combined into an illusion of 3D depth. Head movements were tracked with phone-equivalent gyroscopes and accelerometers, adjusting the view so the user could look freely around a 3D world.

“Those guys are tearing each other apart trying to get the next best thing,” he says. “That has basically driven the costs down to where they’re affordable: displays and sensors that used to be hundreds of dollars now cost pennies.” Oculus charges just $300 (£180) for a low resolution “developer kit” – a kit for companies interested in developing software for the device – and has shipped more than 40,000 worldwide, the biggest deployment of virtual reality headsets in history. It has raised $91million (£55.5 million) in investment funding and done this without actually having a product on the market: you can’t buy it in shops until next year.

The excitement surrounding the Oculus was palpable at the Eurogamer Expo, the games show where I tried out its second-generation prototype. This is understandable: to many enthusiasts, the prospect of stepping wholesale into a virtual fantasy world fulfils one of the oldest promises of the medium.

But there’s more to this technology than gaming. Among the demonstrations Chen showed me was a London tourism experience, built from 360-degree camera views of locations in the capital by the media agency Visualise. The viewer begins perched on top of the London Eye wheel, staring out over the capital, and can beam into various 3D-modelled locations across town – London Zoo, the Gherkin, Piccadilly Circus – by a shift of visual focus.

Another demonstration by Arch Virtual, a business that creates 3D software for a wide range of clients, offered a virtual tour of an architect’s concept house. Using a controller, I was able to “walk” wherever I liked in the building. The sense of inhabiting real space in these demonstrations was astonishing.

Jon Brouchoud, the Wisconsin-based architect who runs Arch Virtual, says that using the Rift developer kit transformed the way he designs. “Any time you’re looking at an architectural illustration projected onto a screen it’s distorted,” he tells me. “There’s a natural distortion based on the way 3D maps onto a 2D surface. Put the same environment in the Oculus Rift and it’s completely different. Being able to stand inside a space, go back to the drawing board and then stand inside it again completely changes the way you design a building. If this isn’t the game-changer for architecture, I don’t know what is.”

Arch Virtual, Brouchoud says, has also taken on several secret projects for medical clients. VR technology has already been used to aid neurological recovery from trauma, as well as to treat conditions such as post-traumatic stress disorder, post-stroke rehabilitation and phantom limb syndrome.

Andrew Poulter, an expert in computer science and simulation at the MoD’s Defence Science and Technology Laboratory, envisages still other applications for the technology hinted at by the Rift. In the past two years the US army has spent $57million (£35million) on an immersive training simulator called the Dismounted Soldier Training System, which tracks not just head movement but limb positioning and weapon movements.

In Britain, Poulter explains, head-mounted VR technology is still “only being used experimentally, within a research context”, although his lab has been looking closely at developer versions of the Rift.

A good deal of British military training, Poulter explains, is still done with on-screen computer programs. But the Oculus Rift, he says, “represents a new class of hardware with real potential. And it is games technology that now sets the trend for the defence industry, not the other way around. The defence budgets of even the largest countries are relatively small compared to the massive budgets that the entertainment industry has.”

It’s easy to forget that none of this technology is really available yet. Oculus is shipping only to developers with the technical know-how to plumb the depths of the software, while many of its prospective rivals remain shrouded in mystery. A few weeks ago, Sony filed a patent related to a head-mounted display, seeming to lend credence to rumours that it plans to launch a VR headset in 2014 for the PlayStation 4.

But the competition is certainly gathering. A device called the CastAR, which overlays 3D images onto a real-world view, recently completed a successful run on the crowdfunding site Kickstarter and has entered production. On the morning that I sat down to write this piece, news broke that another Oculus rival, the gloriously sci-fi sounding Avegant Glyph, will take to Kickstarter in January: it promises to project 3D images onto the human retina and fold up into a pair of headphones when you’re done with it.

The team at Oculus, meanwhile, promises a further revolution in display technology when it exhibits a new prototype at the Consumer Electronics Show in January, and says it will have goggles in the hands of consumers by the end of the year. Looking forward into this immersive future, one is tempted to agree with the 90-year-old lady whose experience with the Oculus Rift has attracted more than two million viewers on YouTube.

“This is something else,” she exclaims raptly, clutching the visor to her face with both hands. “Am I still sitting where I was? Holy mackerel!”