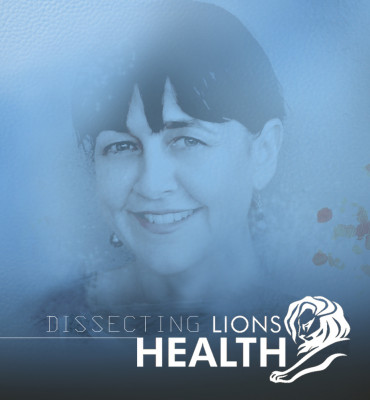 AH: What are the side-effects of a festival like Lions Health?

SHB: It’s a wake up call to think bigger. It’s not about ads. It’s about ideas. Okay, so we’ve known that for a while. But it’s starting to catch on. The result is the bar is being raised.

Healthcare is such an important area. We need to take it seriously.  It doesn’t mean the advertising has to be serious, it can be fun but it needs to be insightful. MACMA’s ‘Manboobs’ from David Buenos Aires is a good example of that. The time of pharma visual clichés, terrible puns and insensitive advertising with no consideration of the target market is over. Thank goodness.

It’s the time of empathy and authenticity.

AH: What would you say has been the best thing about this year’s festival?
SHB:  A highly awarded (his pride of Lions is still growing) and well regarded creative director once said that the secret to getting great work up is having clients that want great work.

The best thing about this year’s festival was having this confirmed. After the Lions Health awards ceremony we headed to the Gutter Bar and met the team behind the Grand Prix winning Pearson’s ‘Project Literacy’ from FCB Inferno London.

The team was easy to spot, as they were carrying their Lion. They were walking on air and very grounded at the same time. Their client was there too. She said that she briefed the project in saying she wanted world-changing Lion-winning work, and she couldn’t be more delighted, as her agency had delivered.

AH: And the worst?

SHB: The worrying thing about Cannes was seeing all those locals and tourists baking themselves on the beach increasing their risk of melanomas.  They looked like they were enjoying themselves. I just hope they had lathered themselves with 30+ sunblock.

AH: Did you have a favourite winner this year? If so, what was it?

They are very different in tonality, but are all great ways of getting attention and getting people to care.

AH: Did you notice any trends in the type of work that won? (Across both Pharma and Health & Wellness.)

SHB: Mainstream agencies dominated the health and wellness category again this year. They also did well in the pharma category.

They’re not new to life-changing healthcare ideas, and have even been involved in product development. Droga 5 New York invented adhesive bandages that double as bone marrow tests back in 2012, before Lions Health existed.

Leo Burnett Sydney worked with their client Samsung to create the brainBAND - a wearable sports technology that measures the force of an impact and relays the data to officials, staff and medics on and off the field.

Havas Life, Sao Paulo worked with Nevo NeuroScience to develop Parkinsounds powered by Spotify. It automatically selects songs so that people with Parkinson’s disease can match their strides with the beat. With its help their steps get increasingly bigger and steadier.

The quality of work from healthcare agencies is getting better each year. A heartening trend was seeing agencies beyond the usual suspects winning Lions.

It was great to see Medulla, a Mumbai-based independent agency, winning Healthcare Agency of the Year. It shows the inspiration is spreading. This means that the opportunity to raise the level of work so it’s Lion worthy is open to agencies regardless of their size or location.

SHB: It’s a great time to be working in healthcare communications.  There are agencies doing great work and it’s only going to get better. A healthy dose of inspiration goes a long way.

So partnering with clients that want great work, making ideas bigger, executing them flawlessly and ensuring they have the reach and results, can make a real difference.

AH: Thanks Sharon. We totally agree.