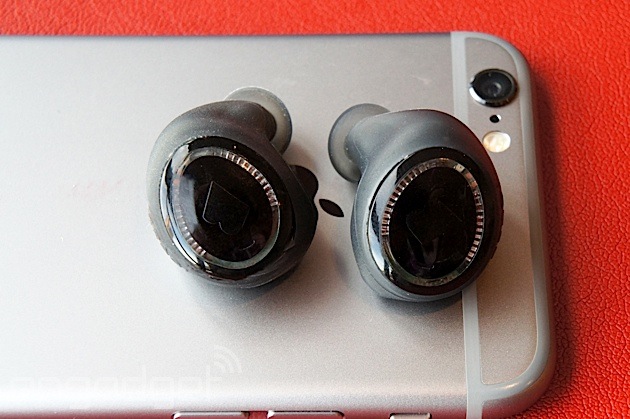 Eleven months ago an audacious Kickstarter campaign promised a sports headphone like nothing we’d ever seen before. Bragi’s spec sheet for “The Dash” read like a ridiculous wish list. There was touch control, two separate ear buds (that connect to each other wirelessly, as well as to your phone), 4GB of onboard storage, 3.5-hours battery life and a self-contained media player. That’s impressive enough, but Bragi didn’t stop there. The Dash would be stuffed full of sensors like an accelerometer, heart rate monitor and an oxygen saturation sensor. It didn’t stop there either. Some pretty special-sounding software meant that The Dash would serve as a personal trainer through audio feedback; there would be a “transparent” mode so you could hear ambient sounds and more. Bragi didn’t stop there.

The Kickstarter campaign was a massive success, with The Dash smashing its modest (and perhaps naive) original goal of $260,000. It went on to raise a total in excess of $3 million, making it the highest funded campaign in Europe. People were obviously excited about these do-it-all headphones. But, with success, comes the inevitable backlash of doubters and naysayers. And not just from the now-weary Kickstarter community. Meeting with Bragi CEO, Nikolaj Hviid, at CES, he told me many big industry players told him what he was trying to do with The Dash simply wasn’t possible. They were wrong. Conclusively. Because I just saw them for myself — the first time the working product has been seen outside of the company. 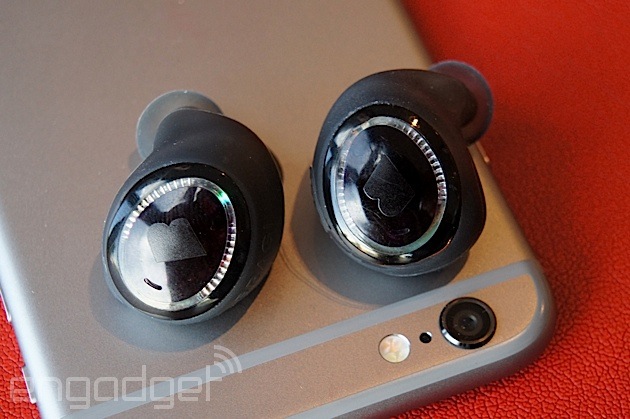 The version I saw lacked the final software, and the hardware didn’t have the gloss and finish that the final product will, but it’s essentially the same hardware. They look very close to the initial renders we saw, not unlike a set of ear molds for swimming, with enough touches to let you know these are a designed product. Hviid placed them in my ears, and I instinctively tapped the side of the right bud. Music started playing. Tap twice, and the track changes. You don’t need to think too much about how to use them for their most basic purpose.

Many worried that because the headphones weren’t connected physically, that they might feel loose, or be prone to falling out. The set I tried had the smallest buds (they come with “skins” with different-sized buds), and I normally pick the larger ones when using in-ears. My attempts at jumping up and down in the Sands exhibition center were met with bemused looks by those passing, but the headphones didn’t budge. Whether this would still be the same eight miles into a run, ears full of sweat, I can’t confirm, but Hviid assures me, the fit has been tested. Put simply, they ain’t going nowhere.

My time with The Dash was more about seeing the product for real. Testing the audio is difficult. I’m reluctant to pass any considered judgment until we get to really put them through their paces. But it might be a good time to mention that Hviid has worked with companies like Harman Kardon and AKG. He’s worked on numerous audio products. His team? They include members who’ve worked on products by Jabra. There’s software expertise from Samsung and the iPhone. The team is not green. 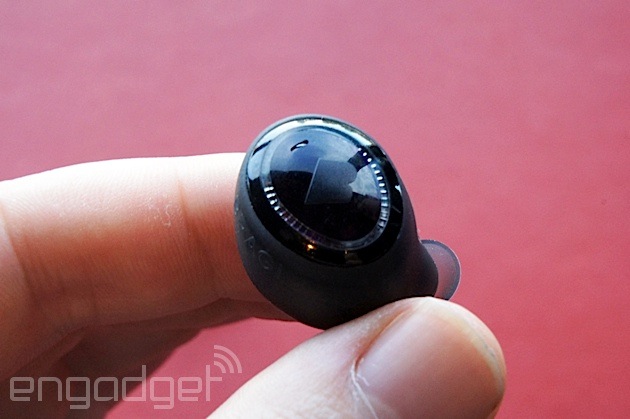 The most exciting thing about Bragi, and The Dash, is the sense that this will be a living product. Kickstarter backers can expect to receive theirs in February. Everyone else, starting in April. But the product has been designed to improve over time. There is an API for developers to create their own apps that work with The Dash — so expect tie-ins with Runtastic and the like. Bragi itself is committed to improving the firmware over time too, with Hviid giving the example that The Dash might soon “learn” what activity you are doing through sensor data, so that when you start a run (or ride), the headphones “ask” you if you started running, and you just nod to kick off the activity tracking.

There are bigger picture possibilities that Hviid is keen to impress on me, too. He likes the idea of using the sensors, and the brain’s spatial awareness for audio to create things like skiing tutorials that guide you (through spatial sound) as you carve through snow. Or my favorite, adding real-time translation to make them a real-life Babel fish. Ambitious? Yes. Realistic? Well having seen how far the company has come, the obstacles it’s overcome (each earphone is its own, tiny, proprietary computer), I’d say: Never say never.

The Dash will cost $300 when it launches in Spring.